Tecnam announced the official launch of the Slot Deposit Program for the P2012 Traveller during its public debut at AERO 2017 in Friedrichshafen today.

With a list price of €2,200,000 (subject to Economic Price Adjustment) a deposit of just €100,000 currently affords potential customers delivery positions in 2019 and critically the unique opportunity to freeze the price of the aircraft they order.

EASA and FAA certification during 2018 with deliveries commencing in 2019. Since the maiden flight, the prototype has accumulated more than 100 flight test hours. The initial flight test results have enabled the Tecnam Design Team to improve the Maximum Take Off Weight to 3.600 kg (7937 lbs). 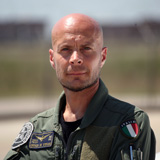 Tecnam’s Experimental Test Pilot Captain Lorenzo De Stefano is currently engaged in a challenging test flight programme and a number of key tests have already been successfully completed. Captain De Stefano commented:
“I had a very special feeling about the P2012 Traveller from the very first moment I saw the designs. Since the maiden flight, the Traveller has fully confirmed all the positive peculiarities that are so distinctive of Tecnam aircraft, making me feel at ease in the testing workload that was to follow. The feedback from the many pilots who had the opportunity to both test and fly the P2012 have all been extremely positive: flying this ‘bird’ is very satisfying indeed. The aircrafts outstanding flight characteristics go hand in hand with a very advanced avionic suite and the impressive performance delivered by the two Lycoming 375 HP engines. My activity in Tecnam as a test pilot is by its nature very intense, but at the same time incredibly rewarding: among other things, being on board a prototype at its first flight and having an active role in its development nowadays tends to be a privilege for just a few. For all this and more, I am very grateful to Tecnam, a company with such a proud history. A company that is committed to changing the face of aviation be it in the GA world or now with the P2012, in regional commercial airline service.”

The arrival into service of the next-generation 11 seat P2012 Traveller has been much anticipated by many airlines, who have been demanding a replacement for the many hundreds of ‘heritage’ aeroplanes in the FAR23/CS23 category currently in service around the world.

Equipped with latest avionics from Garmin, the new G1000 Nxi and powered by two 375 HP Lycoming piston engines, the Tecnam P2012 Traveller will first see service as a passenger aeroplane with US based Cape Air in early 2019, but has been designed from the start to be a very versatile and flexible aerial platform, offering many multi role opportunities including Hydro, VIP, cargo shipping, parachuting and medevac services.

“We are delighted to be now able to accept deposits for delivery positions. This next-generation aeroplane will deliver to operators not only profits, but reliability, efficiency and off course passenger comfort. The Tecnam design team have answered all these customer needs with the P2012 Traveller. We feel we are contributing to real innovation in aviation!” said Paolo Pascale, Tecnam’s CEO.